It has been brought to our attention recently that Toby Elliott posted this on his website during his campaign to become a Borough councillor: 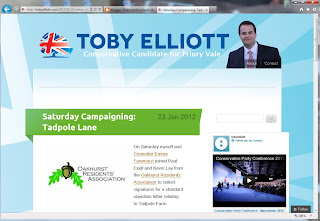 "Saturday campaigning: Tadpole Lane"
"On Saturday myself and Councillor Emma Faramarzi joined Paul Exell and Kevin Lay from the Oakhurst Residents’ Association to collect signatures for a standard objection letter relating to Tadpole Farm".
We wish to clarify that he spent 90 minutes with ORA, as an Oakhurst resident, helping us to collect objections to the Tadpole Farm application.
We have looked into the matter and found that he never sought our consent to use our logo or written documents either in writing or verbally. Now that Councillor Toby Elliott has been elected to Swindon Borough Council we do not consent to our logo or any of our documents being used by him without our express written permission.
ORA members may see some irony in this matter as he was working with us to seek objections and sits on SBC's planning committee which voted to approve Tadpole Farm.  He did not mention that he had worked with us or declare any interest that he may have in our Assocation.
We are surprised by his actions because ORA committee members and the general membership have been working hard for nearly two years with the local residents to put forward the community view.  This view was unanimous amongst the membership that Tadpole Farm should not go ahead because the necessary infrastructure could not be provided to protect our area.
This subject was also raised by Cllr E Faramarzi during a petition debate at Full Council.  We have not tackled this publicly because of councillors privilege within the Council chamber.
ORA are a non-political association and we object to any political use being made of our logo,  written documents or intellectual property.
Posted by Author at Sunday, June 17, 2012